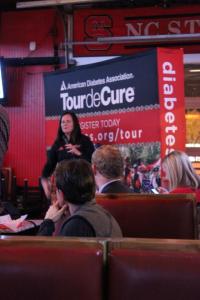 I just submitted a talk proposal to Ignite Minneapolis. Daring to submit the proposal feels a little like daring to jump off a cliff and hope that I have wings! They will get more than 100 proposals and they will only select 18. I will find out by March 20th if I’ve been selected to be one of the presenters at Ignite Minneapolis 8, which will be on Thursday, April 23. Until then, I will need to frequently remind myself to breathe and stay calm.

The audience on April 23rd will be 700 people at the majestic Riverview Theatre, which is just down the street from my house! The key to success is to have a good story to tell, one that engages a majority of people in the room. Ignite talks have the speakers select 20 slides and the slides change automatically every 15 seconds, throughout the 5 minute long talk. That’s right, each speaker gets exactly 5 minutes!! So, my story has to be tight!

The title of my talk is “Athlete First, Survivor Second.” I plan to tell the story of discovering my Inner Athlete, just in time to find out I had breast cancer. My identity as an athlete made a big difference in how I navigated chemotherapy, the initial lumpectomy, and radiation. I rode my bike trainer in my living room throughout chemotherapy. I stared at a picture of the Blue Train, Lance Armstrong’s cycling team at the Tour de France. The Blue Train gave me the strength and courage to ride almost every day. Some days I could only ride for 10 minutes, other days I made it an hour.

A week after I finished radiation treatments, I entered my first ever triathlon. A friend who knew I was an avid cyclist invited me to come to a special breakfast gathering at the triathlon site. It was with other cancer surviving women and Sally Edwards, the spokeswoman for the Danskin Triathlon. Sally is multiple Ironman triathlete, and she competed in the Olympics as a triathlete. After meeting my fellow triathlete survivors, I decided that I wanted to do the sprint distance triathlon the next day.

I didn’t tell anyone I was doing the triathlon. I bought my first ever triathlon outfit and put it on at the local pool that afternoon. I did the pool math and figured out how many laps I needed to do to equal 500 yards, which was the distance I would need to swim the next day. Slowly but surely I swam the correct number of laps, without stopping! I knew I could do the 12 miles of biking and I figured worst-case scenario, I could walk the 3 miles at the end of the triathlon.

The morning of the triathlon, they gave me a tank top that said Team Survivor. And they had all of us cancer survivors line up right after the pro and semi pro women. We were in Wave #2. I had no idea we would immediately be cheered on by the many people watching the triathlon!! It blew me away! And instantly brought tears to my eyes.

The cheering kept happening. As soon as I got done with the swim, as I got on my bike, as I got off my bike and especially on the run, there were so many people who said, “Way to go Survivor!” and “Excellent Work Survivor!” Little by little, I realized the cheering was healing the deep wounds left by my cancer experience. I was amazed to feel how the cheering had the impact of healing me as I was doing the triathlon. I was astonished to discover this.

Then, a few months later I did what was my 10th Tour de Cure, the bike ride for the American Diabetes Association. And there was no way to know who had diabetes and who didn’t. By the end of that bike ride, I was angry, very angry. I was in the unique position to know that being an athlete with diabetes was harder than being a cancer surviving athlete. I wanted love and healing for those of us with diabetes who were out riding our bikes and taking charge of our health by riding in the Tour de Cure!

I encountered one of the Tour de Cure organizers, and she had the where with all to invite me to join the Colorado Tour Organizing Committee. I immediately agreed. And that started the birth of the Red Riders.

At Ignite, I hope to inspire and demonstrate that from some serious bad lemons it is possible to make lemonade. From my cancer experience, emerged the Red Riders. And finding my Inner Athlete, gave me a powerful, healing way to handle my cancer journey.

Thank you for helping me visualize that Ignite Minneapolis will select me to be one of their speakers this year! I need all the help I can get!!

4 thoughts on “How Finding My Inner Athlete Transformed My Life”