Red Riders are cyclists who ride their bike at any of the more than 85 Tour de Cure bike rides in the United States. Tour de Cure is a signature event of the American Diabetes Association.

The purpose of the Red Riders is to support everyone who lives with type 1 or type 2 diabetes and showcase the courage it takes to live every day with this challenging condition.  At the Tour de Cure rides of the American Diabetes Association, those with diabetes who get on their bikes and ride are celebrated as Red Riders!

On Tour day, if you have diabetes, and you wear the Red Rider jersey, then you are recognized as the hero of the day! You will line up at the start line first (with fellow Red Riders!) And throughout the ride and at the finish of the ride,  everyone yells to you, “GO RED RIDER!” 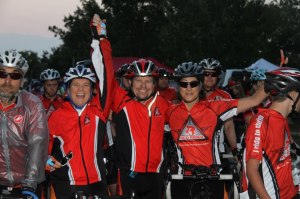 “GO RED RIDER!” means: You are amazing for taking charge of your life! It means we love you for daring to get out there on your bike and make the most of what is often a very difficult situation.

To learn more about Red Riders on the Tour de Cure website, CLICK HERE.
Mari interviewed Type 2 Red Rider Russell Locks from the Wichita, Kansas Tour de Cure about his recent diabetes diagnosis, how riding and changing his eating has dramatically improved his life and how excited he is to ride in the Tour de Cure! You will be inspired!

Tyler Hamilton, type 1 Red Rider from the Michigan Tour de Cure, does an interview with Red Rider Founder Mari Ruddy! Here is the interview for your enjoyment!

Mari has an awesome conversation with type 2 Red Rider Deven Pearson from the Tour de Cure North Shore, MA. Deven weighed over 375 lbs when he was diagnosed with type 2 just a little over a year and a half ago. Listen in as Deven tells the story of how he lost over 160 lbs and how he is now training to ride his new bike for 100 miles in the North Shore Tour this coming May! GO RED RIDER DEVEN!

Mari talks with Bob May, Red Rider from the Florida Tour de Cure, a pretty amazing story that Bob shares about going from a smoker and inactive guy to a marathon runner and an active cyclist! Check out his amazing story!

Mari talks with Erin, type 1 Red Rider from the Tour de Cure Twin Cities. Erin has had type 1 for 17 years and her father and sister also have type 1. She loves hearing Go Red Rider! and she wants YOU to ride with her!!

Mari talks with Heather, type 1 Red Rider from the Tour de Cure Twin Cities. Heather talks about her Team, having type 1 for 22 years, riding a 100 mile ride, and what it means to her family to be able to call out GO RED RIDER!

Tune in here as Mari talks with Yelena, type 1 Red Rider from the Tour de Cure Napa Valley and why she will be riding a bike trainer in the Red Rider Tent the day of her Tour de Cure! GO RED RIDER!

Tune in here as Mari talks with Bemi, age 16 and a Red Rider in the North Carolina Tour de Cure and her dad Derek about diabetes and their Tour de Cure Story! Derek is on his way to raising $10,000 to Stop Diabetes, and Bemi, despite her fears of lows, of highs and of slowing others down, she is doing her first Tour de Cure ride this year! GO BEMI! GO DEREK! and GO RED RIDER!!!

Mari talks with Spike Burkhardt, type2 Red Rider from the Silicon Valley Tour de Cure about his first Tour de Cure and why he is such a passionate cyclist and now he’s a Champion too! GO RED RIDER SPIKE!

Mari Talks with Brooks Benson, type 2 Red Rider in the Tour de Cure Napa Valley! on March 19, 2013. Brooks has a compelling story of struggling with weight loss and living with undiagnosed diabetes for more than 5 years. Brooks raised over $5000.00 his first Tour de Cure, listen in and hear how he did it! GO BROOKS!

Scott has a very inspirational story about his 100 mile ride he did at the Tour in 2012. Listen as he talks about living with type 1 for almost 33 years (since he was 5 years old!) and training to ride for 100 miles. You will be motivated!!!

Theirs is a very uplifting story of weight loss, lifestyle transformation, strong love and partnership and committing to the cause to Stop Diabetes alongside the American Diabetes Association. You will be dramatically inspired by their story!!!

Happy New Year from Mari! Enjoy this little message from Red Rider Founder Mari, to welcome and love up all Red Riders!

This site uses Akismet to reduce spam. Learn how your comment data is processed.

I’m Mari and I’m an amateur endurance athlete who has had type 1 diabetes for almost 40 years. I’ve survived breast cancer twice. I am not a medical professional nor am I giving medical advice.